Snaro bird points are great in the barn

Some of my fondest memories as a child are of summers spent on the farm.  Mom said it was only 2 weeks a year, but I can remember so much she has to be wrong.  I can remember roping pigs, shooting cows with the BB gun, catching frogs, and trapping mice in the grain barn, but mostly I remember shooting thousands if bb’s at sparrows, blackbirds and pigeons.  A pigeon can make a little heart skip a beat for sure.

Pigeons were a real trophy even before Snaro bird points 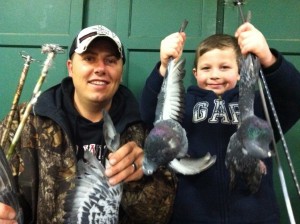 Sean and Arcus with enough Snaro pigeons for lunch

When I was 7 or 8 years old, if you could kill a pigeon with the bb gun, you were the man.  They were the big game of the farm for sure.  They lived in the top of the tall silo’s and if a barn had the right makeup and entry and exit holes, pigeons loved living there as well.  It only took a day or 2 for us to scare every pigeon off the farm, so we had to strike out to find some fresh birds.  That was lesson #1.  Pressure is everything, and you can only push an animal so many times before it decides to live somewhere else.

Lesson #2 was permission.  Grandpa let us know we had to have permission to hunt the other farms in the area, and we got used to asking for it.  Of course it often meant a couple cookies and a can of pop when we stopped in, but we knew we had to check in and take care of the place or we could not come back.  We got to know all the neighbors who had pigeons and they all ket us hunt, and we also learned not to put too much pressure on the birds or the walks got real long to find the birds.

Over time we learned more and more about the best ways to kill these pigeons, and one of the best is a sneak attack under the cover of darkness.  Sneak into a barn when the birds are asleep and you get several shots before they can figure out how to fly the coop.  These night outings became our most productive tactic, and produced most of our birds.  We also learned lesson #3.  Too much light spooks game.  We started playing with what could now be described as filters on our flashlights.  If we stretched the bottom of our tshirt over the end of the flashlight, the amount of light that came through dimmed 5 fold, and red and green tshirts became our colors of choice.  Amazing that by trial and error we came up with the same game easing night colors that hawglite uses on their night time hunting systems.  What works on hogs works on barn pigeons.  As we got older we moved to recurves and flu flu arrows, and we bought some Snaro bird points to keep our arrows from sticking tin the roof of the barn.

My kids are big enough to shoot bb guns now but they don’t.  One chooses a big bore cold steel blow gun, and the other flings Snaro tipped arrows barebow from his Hoyt compound (tipped with a

Snaro so they don’t stick in the roof of the barn), but we still chase pigeons.  No more tshirts and flashlights though, we are all high tech Hawglite equipped night hunters.  I even manage a bird or 2 with my Snaro bird point tipped flu flu arrows.  There are lots of barns close to home here, and they are honing their skills as hunters just like I did as a boy, only I am there to mentor them.  Both boys love to hunt pigeons, and their favorite tactic is the productive night assault.  I know they will tire of it eventually and move on to other game, but for now, we are happy to bang on some doors, and sneak in under the cover of night to chase barn pigeons.  Some things just never grow old.