Bow hunting small game is not very popular, and I often wonder why?  It can’t be lack of action or opportunity.  Bow hunting small game affords the longest hunting seasons anywhere in the nation.  In Minnesota it goes from mid September until the end of February for squirrels and rabbits.  We can still hunt, stand hunt, spot and stalk, or flush fowl and try our hand at flying targets like pheasant, grouse and geese.  Why don’t we read more about it or see it in TV?

Bow hunting small game is not very popular for a couple reasons.  The first reason is it’s not touted as ‘cool’ on TV or in print.  It’s all fantasy and adventure on TV.  Big bucks and exotics locations trump the world of entertainment for good reason.  TV is an escape from reality, and the shows we watch fill this need.  99% of the hunting population will never shoot a 150 inch buck, or fly to Africa and chase plains game, so we live those dreams through someone else.  But it’s not reality.  Reality is an $30,000 car if your lucky, not a Lamborghini.  Reality is a middle aged ever rounding wife, not the girls of MTV.

For some reason the bow hunting public thinks the only way to roll is a $900 bow with $500 in accessories, and arrows that when tipped with broad 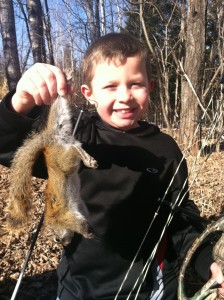 heads run close to $300 a dozen.  Necessary very seldom, but seemingly the new norm.  Bow hunting in its purest form is a quintessential solo experience.  Man vs beast of any size, one on one on their turf.  Even when a group of bow hunters take the field, the final act is only one man and one beast.  A game of chess with the odds always stacked against man, and when we win it’s special.  Special to the one that dropped the string in the final play, not the rest of the world.  Special to you, the bow hunter.

These thoughts in mind, the kids and I take to the woods with a trusted recurve, or maybe a compound and no sights or release.  Our arrows run $50 a dozen, and we tip them with Snaros so they don’t get lost under the grass or leaves of the forest and fields.  We know where the rabbits live, where the squirrels run, and which barns we have permission to chase pigeons in.  We throw arrows at doves coming to the water in the evening, and starlings under the bird feeder in the mornings.  And we go because it’s fun.  Bow hunting small game may not be cool to everyone else, but we all enjoy it and that’s important.