Giant canadien moose had always been of bowhunting dream of mine, so in 2010 I booked a trip to BC to chase the largest deer in North America.  10 days in the bush, chasing

moose all day, and camping in the wall tent at night.  I was geared for this trip, and from talking with the outfitter, I knew bowhunting grouse would be a bonus along the way.  47 arrows were packed and ready to rock, with every style of broadhead, judo and whatever else I could muster for the end of my arrows for bowhunting grouse.

No moose, lots of bowhunting grouse

As the trip went on, it became apparent the moose were not going to come easy.  The weather was warm, and there were new roads into our unit which meant more hunters.  I don’t know which one ruined the action, but my guess is the human pressure.  We could hear cows wailing, and bulls grunting, but try as we may, we could not work them in.  We worked moose every day, but never laid eyes on one outside the truck.  The moose were there, but they were not going to play.  Thank god we could kill time bowhunting grouse.

A full quiver for bowhunting grouse 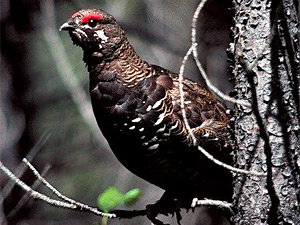 As the week went on I brought more and more arrows for bowhunting grouse each day, and shot at every grouse I found unless I was lucky enough to fill my legal limit.  Those 47 arrows turned into 9 by the end of the week and I learned a lot about bowhunting grouse along the way.  We hunted both ruffed and spruce grouse, and the easiest shots of the week always came from spruce grouse in the trees. We spotted most of the birds from the road, and got out for the stalk.  It became apparent as the week progressed that if you saw one on the road, you should start checking the trees for more.  The tree birds stayed put while the road birds did their best to keep a tree or 2 between you and them.  I did not take long to develop an eye for spotting the size and shape of a grouse in a tree, and we were shooting a lot.  We had grouse pizza, grouse in Alfredo sauce, and grouse in red sauce.  We had grouse in omeletes for breakfast and grouse on crackers after supper.  We ate a lot of grouse.

Which 9 arrows survived a week of bowhunting grouse?

The only arrows I had left at the end of the trip were 6 moose arrows, and 3 others all tipped with Snaro bird points for bowhunting grouse.  I lost all

my judos, and the 2 G5 tips I brought along through the trees. The Snaros flew from my 60 lb compound as well as my 50 lb recurve, and we killed lots of birds with each weapon.  I used the 2 and 3 inch from the compound bowhunting grouse so they could clear the riser at full draw with my original hunting arrows, and I used the 3 and the 6 inch in my recurve bowhunting grouse to give me a margin for error.  (there is a lot of air around a grouse)  The Snaros were almost impossible to lose, and aside from the two I left in the top of different spruce trees, I came home with three of the five I left with.  The design of the Snaro heads keeps them from diving under grass, moss and leaves for birds on the ground.  The grass and forest leaf litter ate my broadheads of every style at a quick pace.  The Snaro bird point also keeps the heads from skipping through the woods when bowhunting grouse.  My Snaros quickly became the head of choice for birds in the trees as well, as even a solid hit with a broadhead meant the arrow kept going far enough it was futile to search for them.  The Snaro bird tips stopped in the brush and branches and we always found them.  My best guess is the broadhead tipped arrows lasted 2 to 3 shots before they were lost, and the Snaros were all I had left the last 4 days of the trip.  I was glad I brought them along on my trip to British Columbia for what twisted from a dream moose hunt, to a trip devoted to bowhunting grouse.