Ever think about hunting birds with the bow and a Snaro?  I used to watch videos of Byron Feruson and Howard Hill shooting aerial targets with the bow and I was in awe. For years I told myself I needed to try a few aerial targets in the back yard just for fun.  Then, a few years back my dad, my brothers and I were preparing for our very first archery elk hunt.  We practiced. And practiced, then practiced some more. We practiced until we needed targets a bit more challenging than the stationary targets we were using. 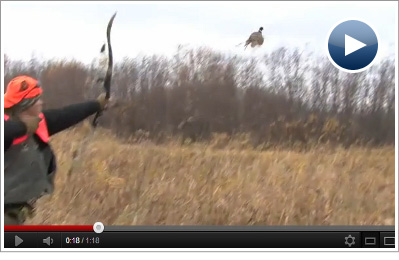 That same summer I had the opportunity to do some shooting with Brooks Johnson of Double Bull Blinds, now owner of Snaro. Brooks and I played around shooting aerial targets, and got good enough that we filmed a show for the Sportsman Channel shooting quail on the wing with our recurves. We had so much fun that the following year we filmed another episode shooting chukar partridge out of the air. These were pen raised birds, but a exciting challenge nonetheless. When Brooks introduced me to the Snaro I became a lot more successful on birds in flight and he and I discussed the option of hunting wild birds with our bows.

Enter Brooks the pointing dog, a German Shorthair Pointer that was our most biggest asset coupled with a Snaro. Since that first year Brooks Johnson and I have successfully taken quail, chukar partridge, ruffed grouse, pheasant and even wild woodcock with our bows and a Snaro tipped arrow. Practice for birds with a bow doesn’t get boring like shooting at stationary targets can. Every shot is different, and aerial archery practice creates such an infectious archery atmosphere that even our wives and kids join us in the back yard. At Snaro.net you can find everything you need to have as much fun as Brooks and I have had these past few years.