Aerial targets can be alive

My German shorthaired pointer Brooks was locked up tight on a bird about ten yards in front of me near a small clump of hazel brush. As I walked up to flush the bird I knew it must be another woodcock. A ruffed grouse would have flushed before I got that close. About 3 yards behind Brooks I stopped for a second or so to take in the whole picture, the quivering tail, the right leg cocked, and the eyes refusing to even blink. A few feet in front of her nose at the edge of the hazel brush the woodcock sat as still as the dog, hoping to avoid detection. As I took one more step the little russet colored ball of feathers exploded into the air. As soon as I took the shot I knew that this was a bird for the gamebag.  After Brooks retrieved the downed bird I moved forward to retrieve my arrow tipped with a Snaro bird point. 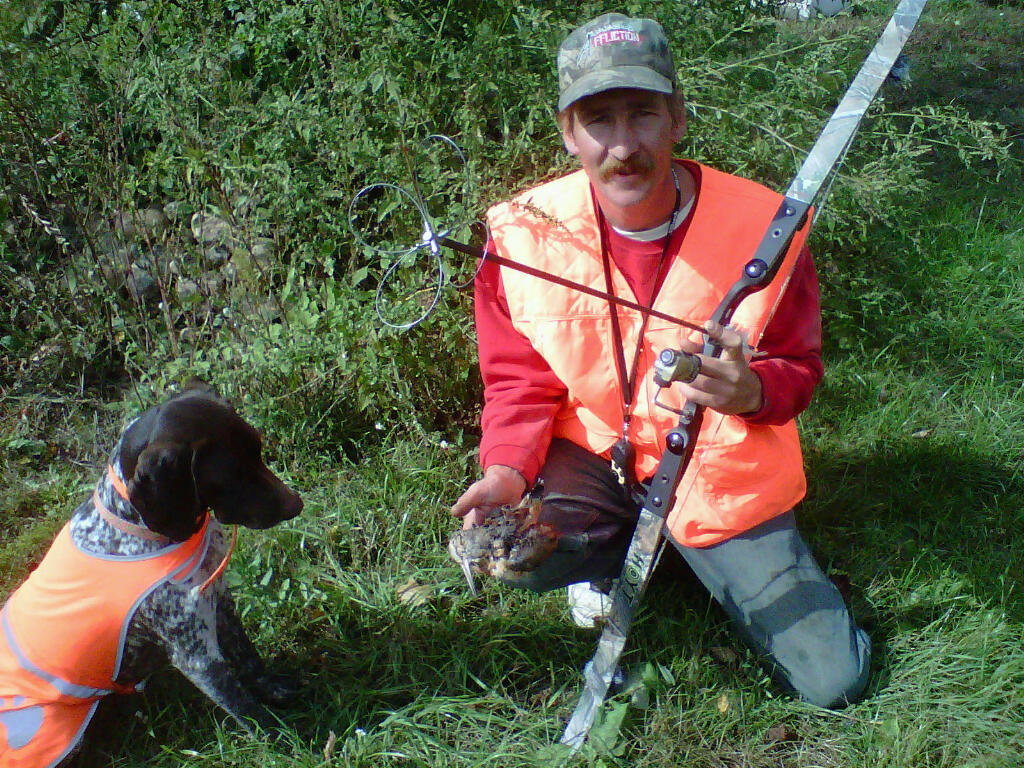 Birds Eye View in Wisconsin is a great resource for all thing aerial. Even woodcock! Shooting birds with a bow

My love affair with bird hunting began at an early age as did my love of archery deer hunting. Growing up in rural Wisconsin in the 70’s and 80’s I spent countless hours in the woods every fall, either sitting in a treestand for deer or stalking gray squirrels feeding on acorns on “Grandma’s back forty”.  If I was lucky enough to fill my deer tag I would put my old recurve back in the closet, grab the old single shot 20 gauge and start pounding the brush for birds.

Back then I didn’t have a bird dog and grouse numbers were down, so I really had to put on some miles in the    woods to bag a few birds. The last week of September and first few weeks of October soon became my favorite 3-4 weeks of the year as the woodcock began their migration. Instead of walking 4-5 miles to flush a few grouse I could at times walk a few hundred yards and flush 50 or 60 woodcock. Hitting those woodcock was a different story. It took me a few seasons and a few lectures from Dad about wasting shotgun shells before I figured out how to hit them.
Once I figured out how to hit these exciting little birds I almost quit shooting at them. Not because it was not a challenge anymore, but because often when I would knock one down it took a half an hour crawling around on my hands and knees trying to find it in the brush and leaves.  I swore to myself that once I had a place of my own I would have a bird dog!  Too much valuable hunting time was being spent searching for downed birds.

When my bride and I bought our first home we had our first bird dog within a month. She was a beautiful black and white springer spaniel and changed the way I hunted birds. I enjoyed it so much that I gave up bowhunting for almost 20 years just so I could spend all of my time afield chasing grouse and woodcock.  That’s not to say I didn’t miss hunting with my bow, I really did miss it.
A few years ago I decided I needed to take up archery hunting again, and as I shopped for new archery gear I discovered the Snaro bird point. I kind of chuckled as I thought about the prospect of hunting birds with a bow, then I thought about the way a woodcock often flushes straight up for 12-15 feet before rocketing out over the brush. Just for fun I bought a few Snaro bird points and a few flu flu arrows and when I got home I started practicing on aerial targets. I started out with some beach balls that my wife and kids would throw straight out in front of me. The blunt tip of the Snaro bird points wouldn’t pop the ball and I found myself falling in love with archery gear all over again. The more aerial targets I shot at, the smaller and faster the targets got.
Hunting birds with a bow and a Snaro I knew would be tough, especially with a flushing dog trained to range 10-15 yards in front of me. Then my mother-in-law dropped off a gsp, 7 weeks old.  Brooks turned out to have a ton of natural talent, and learned quickly what was expected of her.

With a Snaro bird point and a few Johnny flu flus from Snaro.net Brooks and I headed out to my favorite woodcock “honey hole”, which is where this story began. That woodcock was the first wild bird I had taken with a Snaro and my bow, and every year as the nights get cold and the mornings are frosty I relive that memory. I have taken birds on the wing with a Snaro since that day, but that first is forever etched in my mind like a DVD I can rewind and play over and over.
Hunting with a bow and Snaro is exciting and challenging and requires a lot of practice at home. A good pointing dog will greatly improve your odds of success though I suppose it could be done with a flushing dog. Go to Snaro.net, try some aerial targets and maybe you’ll find yourself loving bowhunting birds as much as I do.