A friend of mine and a fellow bird hunter asked me last weekend if I’d ever had smoked pheasant. And indeed I have, smoked a pheasant with my bow and a Snaro just last weekend in fact. He said he once shot a grouse on the ground with his bow. When I told him the pheasant was flying he looked at me like I was either crazy or lying. I pulled out this video clip and showed him…. 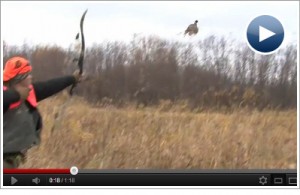 I’ve smoked pheasant out of the air plenty of times, with both a recurve and a compound bow since I went to Snaro.net and ordered some Snaros and Johnny Flu-Flus. I did a bit of practicing on aerial targets (2 liter bottles with a little water in them work great) and went to Birdseye View in Wisconsin 906 221 0783 and practiced on quail, chukar partridge, and pheasant.

If you have never smoked pheasant out of the air with archery equipment you don’t know how much fun your missing. Carey at Birdseye View showed me how rewarding and how much fun it can be with a good pointing dog.  I actually bought some quail, chukar partridge and pheasant to bring to the cabin so my kids and my dad could see how much fun it was. The birds flew great when my dog flushed them, and with the Snaro even my 8 year old son knocked one out of the sky with his youth model Hoyt!